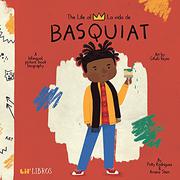 From the The Life Of series

Part of the bilingual The Life Of series of biographies showcasing the lives of Latinx icons, this board book profiles Jean-Michel Basquiat, Black American artist of Haitian and Puerto Rican descent.

The authors introduce young readers to Basquiat in simple, short statements that are easily accessible to a preschool audience. The information—presented in both Spanish and English—centers on Basquiat’s early life and professional successes. From a young age, Basquiat showed an inclination toward art and used his father’s work supplies to draw at home. His mother described his artistic creations as “messy, bright, and bold!”—a trademark style that would define his life’s work. As he grew older, buildings and subway trains were a canvas for his graffiti artwork before his paintings gained entrée into art galleries. Appealing illustrations with selective coloring accompany the text. Another book in the series, The Life of / La vida de Evelyn, introduces young children to Mexican American prima ballerina Evelyn Cisneros. Children may relate to some of the challenges experienced by young Evelyn, such as overcoming shyness and feeling excluded due to the color of her skin.

An age-appropriate portrait of an important artist, sketched effectively in broad strokes.