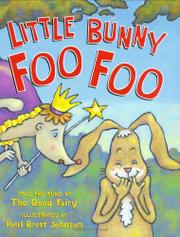 The Good Fairy doesn’t like tomfoolery. Little Bunny Foo Foo’s not a bad bunny, but he has mischief on his mind and a bunch of mud pies in his possession. He bops a group of field mice on the head and gets a warning from the Good Fairy. He has three chances and then she’ll turn him into a goon. He doesn’t listen and goes after woodchucks, foxes, and bears with his mud pies. Of course, the Good Fairy makes good on her threat. Johnson’s rendition of the classic children’s song is charming. His signature cartoonish illustrations are a perfect match, and turning the song into a narrative by the Good Fairy adds to the fun. The music and hand motions are included on the last page. Storytimers will be singing along from page one. (Picture book. 2-6)