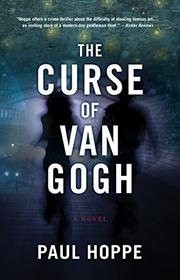 THE CURSE OF VAN GOGH

Tyler Sears is an art thief who’s had the bad luck of being caught more than once. After a stint in jail, “courtesy of the botched [Museo del] Prado job,” he’s decided to go straight. He attempts to live a life of normalcy as a bartender in New York City, and there, he deals with both romantic and familial difficulties. But when he’s summoned to the foreboding office of a wealthy Japanese businessman, his fears of being forced back into crime are realized. Tyler must steal a dozen well-known paintings from an upcoming art show in Washington, D.C.; the businessman is threatening his family, so he can’t fail. Relying on connections to the criminal underground and his cunning talent for planning, Tyler embarks on his mission but fears the task ahead. Added into the mix is the lovely Lucy, a girl Tyler jilted after a rendezvous in Paris but whom he can’t seem to forget. Can Tyler steal the paintings without being caught, killed or getting his heart broken? The story makes use of a range of well-scripted geographical details, jumping between New York City and Washington with frequent stops in between—including a brief foray in the Southwest—and the author shows a deep awareness of these locations. In Hoppe’s hands, Tyler stakes his claim as a cool gentleman thief: He’s a lover of fine art, liked by just about everyone he meets and never one to turn down a joint from a pretty lady. However, some readers may not have a high tolerance for an ARTnews-reading ex-felon bartender. His antagonists also tend to lack subtlety; Tyler’s employer, for example, seems strangely ambivalent about his welfare, an attitude which ultimately proves counterproductive.

An inviting, if uneven, story of a modern-day gentleman thief.