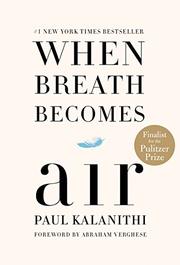 A neurosurgeon with a passion for literature tragically finds his perfect subject after his diagnosis of terminal lung cancer.

Writing isn’t brain surgery, but it’s rare when someone adept at the latter is also so accomplished at the former. Searching for meaning and purpose in his life, Kalanithi pursued a doctorate in literature and had felt certain that he wouldn’t enter the field of medicine, in which his father and other members of his family excelled. “But I couldn’t let go of the question,” he writes, after realizing that his goals “didn’t quite fit in an English department.” “Where did biology, morality, literature and philosophy intersect?” So he decided to set aside his doctoral dissertation and belatedly prepare for medical school, which “would allow me a chance to find answers that are not in books, to find a different sort of sublime, to forge relationships with the suffering, and to keep following the question of what makes human life meaningful, even in the face of death and decay.” The author’s empathy undoubtedly made him an exceptional doctor, and the precision of his prose—as well as the moral purpose underscoring it—suggests that he could have written a good book on any subject he chose. Part of what makes this book so essential is the fact that it was written under a death sentence following the diagnosis that upended his life, just as he was preparing to end his residency and attract offers at the top of his profession. Kalanithi learned he might have 10 years to live or perhaps five. Should he return to neurosurgery (he could and did), or should he write (he also did)? Should he and his wife have a baby? They did, eight months before he died, which was less than two years after the original diagnosis. “The fact of death is unsettling,” he understates. “Yet there is no other way to live.”

A moving meditation on mortality by a gifted writer whose dual perspectives of physician and patient provide a singular clarity.