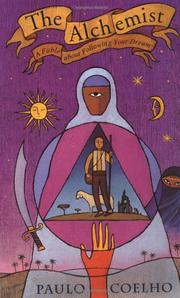 Coelho is a Brazilian writer with four books to his credit. Following Diary of a Magus (1992—not reviewed) came this book, published in Brazil in 1988: it's an interdenominational, transcendental, inspirational fable—in other words, a bag of wind.

The story is about a youth empowered to follow his dream. Santiago is an Andalusian shepherd boy who learns through a dream of a treasure in the Egyptian pyramids. An old man, the king of Salem, the first of various spiritual guides, tells the boy that he has discovered his destiny: "to realize one's destiny is a person's only real obligation." So Santiago sells his sheep, sails to Tangier, is tricked out of his money, regains it through hard work, crosses the desert with a caravan, stops at an oasis long enough to fall in love, escapes from warring tribesmen by performing a miracle, reaches the pyramids, and eventually gets both the gold and the girl. Along the way he meets an Englishman who describes the Soul of the World; the desert woman Fatima, who teaches him the Language of the World; and an alchemist who says, "Listen to your heart" A message clings like ivy to every encounter; everyone, but everyone, has to put in their two cents' worth, from the crystal merchant to the camel driver ("concentrate always on the present, you'll be a happy man"). The absence of characterization and overall blandness suggest authorship by a committee of self-improvement pundits—a far cry from Saint- Exupery's The Little Prince: that flagship of the genre was a genuine charmer because it clearly derived from a quirky, individual sensibility.

Coelho's placebo has racked up impressive sales in Brazil and Europe. Americans should flock to it like gulls.