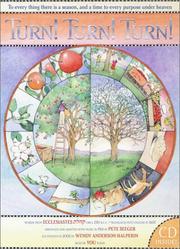 The title of Pete Seeger’s best-known song is also the best way to view Halperin’s art; for each line of lyrics, she offers a circular painting, composed in the round and containing dozens of microscopically precise vignettes exemplifying the given idea. The whirl of human, animal, and imaginary figures makes mesmerizing viewing: “A time to die,” for instance, is bordered by multiple scenes of predators, prey, and predation in sequence; what three pigs “build up,” a huffing, puffing wolf breaks down; and dozens of children, each a distinct individual, hold hands in a great arch over the final promise. Seeger himself makes occasional appearances in the pictures, and adds a closing account of how—and why—the song came to be written. Halperin is in top form here, creating a worthy, engrossing exegesis for the timeless wisdom of Ecclesiastes. Packaged with musical arrangement, and a CD with versions of the song by Seeger and the Byrds. (Picture book. 7-9)