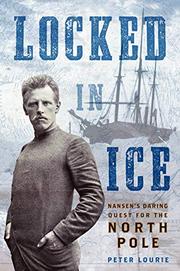 A vivid (sometimes all too much so) account of Norwegian scientist, explorer, and Nobel Peace Prize winner Fridtjof Nansen’s 1893-1896 try for the North Pole.

Though the Nansen expedition was possibly even more meticulously planned than Ernest Shackleton’s Antarctic venture, both had similar results—neither reached their goals, but both endured weary months of such wild mischances that it seems miraculous that neither lost a man. Lourie (Jack London and the Klondike Gold Rush, 2017, etc.) draws generously from Nansen’s detailed records to describe the special gear and provisions he, in many cases, invented or improvised (“meat-chocolate,” yum, giving way in later, more desperate, times to “cold boiled bear and a few ounces of bread”), to introduce his human and canine crews (the latter eventually becoming their own food supply), and to retrace the trek’s route. The highly informative appendix includes a wealth of information, including conversations with modern polar explorers that present a picture of what being out on the arctic ice is like…highlighted by guidelines for pooping outdoors in subzero temperatures. Though the many sepia-toned maps and photographs are too often dim and foggy, the images add both flavor and immediacy to the narrative. Only glancing mention is made of all Nansen learned from the Inuit residents who aided him.