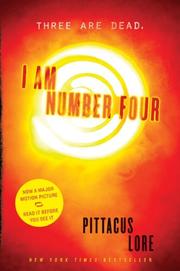 I AM NUMBER FOUR

From the Lorien Legacies series, volume 1

If it were a Golden Age comic, this tale of ridiculous science, space dogs and humanoid aliens with flashlights in their hands might not be bad. Alas... Number Four is a fugitive from the planet Lorien, which is sloppily described as both "hundreds of lightyears away" and "billions of miles away." Along with eight other children and their caretakers, Number Four escaped from the Mogadorian invasion of Lorien ten years ago. Now the nine children are scattered on Earth, hiding. Luckily and fairly nonsensically, the planet's Elders cast a charm on them so they could only be killed in numerical order, but children one through three are dead, and Number Four is next. Too bad he's finally gained a friend and a girlfriend and doesn't want to run. At least his newly developing alien powers means there will be screen-ready combat and explosions. Perhaps most idiotic, "author" Pittacus Lore is a character in this fiction—but the first-person narrator is someone else entirely. Maybe this is a natural extension of lightly hidden actual author James Frey's drive to fictionalize his life, but literature it ain't. (Science fiction. 11-13)