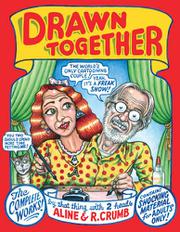 The Collected Works of R. and A. Crumb

A scrapbook from the first family of American cartooning, containing collaborative strips that date back to the mid-1970s.

The title serves a dual purpose, underscoring the claim, made throughout the book, that the authors are “The World’s Only Cartooning Couple,” as the two-headed cover proclaims, but also indicating the qualities that drew them together and keep them together. In a flyer for the aptly named Dirty Laundry Comics, Robert Crumb dubs them “the John and Yoko of Underground Comics!!” There are some parallels. In both cases, he had a wider following, and some fans have suggested (as these panels admit) that she was horning in, co-opting his work by capitalizing on his renown. In both cases, he proved to be his wife’s strongest defender, suggesting that, if anything, she is carrying him. “Aline, I can’t do this without you,” he writes in one of the four-panel “The Crumb Family” strips (changes of pace from the longer, more elaborate narratives that dominate). “If I tell stories about my life it just comes out grim & sad.” Not only does her presence provide comic relief, but the two of them present her as the stronger, both physically and emotionally. And then there’s the sex (and there’s plenty of it). “I go where the butt goes,” he reflects while she beams, “So nice you’re actually moving to a remote village in a foreign country just to satisfy an impulsive whim of mine!!” Generally, each of them draws themselves, though the panels make note of occasional reversals. The collection documents the changes in their lives as they’ve grown older, had a daughter (now a published cartoonist herself), moved to the south of France, and received more attention than they’d wanted through a couple of films (a documentary on the Crumb family and the adaptation of American Splendor, the acclaimed bio-pic of friend and collaborator Harvey Pekar). From the bathroom to the bedroom, they respond to the question of just how open and honest a marital comic can be.

Not the most ambitious Crumb work, but there’s a lot of love here.