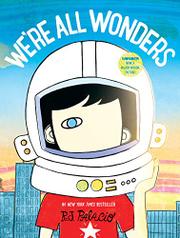 Auggie, from the bestselling novel Wonder (2012), returns as a picture-book protagonist.

Though Auggie tries to do the normal things other kids do—ride a bike, eat ice cream, play ball—he doesn’t look like other kids. Though it takes knowledge of previous installments in the Wonder series to understand that Auggie has serious facial deformities and has had many corrective surgeries, it is clear what Auggie endures from other kids: “Sometimes they stare at me. They point or laugh. They even say mean things behind my back. But I can hear them.” His mother tells him he’s a wonder; in fact, “we’re all wonders,” Auggie informs readers. But with no characterization and little in the text beyond inspirational messages, it’s not clear what makes Auggie a wonder; he wants to be taken as he is, but readers—unless they have read the other volumes—never come to know him. Borrowing the now-iconic stylized image of a nearly featureless, one-eyed, white Auggie from the original hardcover edition and employing colorful, digitally rendered art, this edition pulls the heartwarming spirit from Wonder but little of the substance. Auggie’s first-person point of view is too narrow to allow for the range of voices that made the novel so rich. Palacio has perhaps mined the same material once too often.

A feel-good volume lacking the wonder of Wonder.