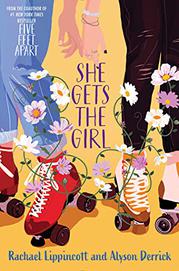 SHE GETS THE GIRL

Many begin college with hopes of personal reinvention, and Alex Blackwood and Molly Parker are no exception.

Apparently opposite in every way, both girls nevertheless arrive for their freshman year at the University of Pittsburgh with the same goal in mind: to fundamentally change the way others perceive them and get their dream girls. Easy-peasy. Molly, whose mom is a transracial adoptee from Korea and whose father is assumed White, was socially anxious in high school. She worries that her close friendship with her mother holds her back. Willowy, blond Alex, who is implied White, has never once found herself at a loss in a social situation, and yet her fairy-tale story of adolescent beauty and wit is tempered by having a single mom whose struggles with alcohol abuse meant shouldering responsibilities far beyond her years. Utilizing tried and true tropes, married couple Lippincott and Derrick cut right to the heart of the matter when it comes to the mysteries of romance. Queerness itself is never the motivator of the drama, and gratifyingly, both girls find in one another the means to explore and unpack complexities of life unrelated to their sexualities. Nothing is made simplistic—not Alex’s relationship to self-expression and conventional beauty standards, nor Molly’s experiences of culture and community in a world that has expectations of her based on her racial identity.

Sweet, honest, and filled with personality.