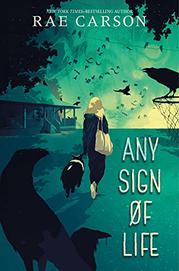 High school senior and WNBA hopeful Paige wakes up from a coma to find herself the only living person in her Columbus, Ohio, neighborhood.

What happens next is not for the faint of heart: Dead, decomposing bodies—beginning with Paige’s own family—litter the pages of this smart, suspenseful thriller. All Paige knows is that she went to bed with the flu one night and woke up six days later, severely dehydrated, to a changed world. She learns from a prerecorded radio broadcast that the flu that hit Columbus harder than usual became a national emergency, but as she works to regain her strength and gather supplies, she remembers the coronavirus pandemic of her childhood and realizes how improbable it is that people in multiple cities naturally caught the flu and died so quickly. She’s cautiously thrilled to find two other living teens: former high school football star Trey, a would-be pre-med student, and Tanq, an asexual teen girl who is an artist. Together they set out toward Lake Erie hoping to reach fellow survivors Manny and Wyatt—whose live radio broadcasts promise answers—before their unknown enemy finds them. Paige’s tenacity is appealing, and her relatable first-person narration shines when observing tiny details of her surroundings and matter-of-factly processing topics like privilege, menstruation, and reproductive rights. Trey is Black, and Manny is Puerto Rican; all other major characters are White.

Suspenseful and totally un-put-down-able—with a clear opening for a sequel.