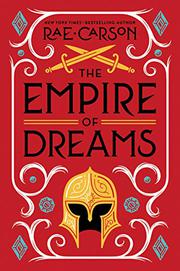 THE EMPIRE OF DREAMS

A foundling orphan girl sets out to prove her worth by joining an elite—and patriarchal—fighting force.

Seventeen-year-old Red Sparkle Stone is about to be adopted by Empress Elisa and Prince Consort Hector of the kingdom of Joya d’Arena and gain everything she always dreamed of: a family and a place in the world. When the adoption petition is denied, blocked by the empress’s political rivals, Red asks to join the Royal Guard, traditionally a male-only institution. Her journey within the Guard is fraught, complicated even further by the news of a potential coup in the works. Carson (Most Wanted, 2018, etc.) returns to her Girl of Fire and Thorns world with a stand-alone novel featuring Red, the enslaved girl rescued by Elisa in The Bitter Kingdom (2013). This novel develops a taut, self-contained, political mystery within the confined quarters of the Guard and the palace, with a few chapters set in the past showing Red’s harrowing, traumatic history. Red’s PTSD is deftly and sympathetically handled and so is her coming-of-age as a capable, truth-speaking woman alongside her equally well-developed brothers in arms. The noticeable absence of other female characters for most of the book is a consequence of setting the story within the confines of a strictly gender binary, male-only Royal Guard. Most characters are brown-skinned.

A rewarding stand-alone novel with effortless plotting and deft characterizations.