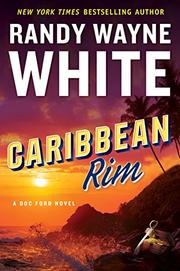 Looks like Dr. Marion Ford’s latest research project in marine biology will have to wait for yet another tangle, his 25th, with members of a lower species.

Doc Ford (Mangrove Lightning, 2017, etc.) tells everyone who’ll listen that he’s come to the Bahamas to continue his study of sharks’ responses to the sound of boat engines. Even though he has official documents to support his story, it’s not the whole story; he’s really looking for archaeologist Leonard Nickelby, a former professor who ended his partnership with aging treasure hunter Carl Fitzpatrick by running off with three antique coins and a logbook recording all the best places Fitzpatrick had to search for booty. It turns out that Nickelby and his former student Lydia Johnson, who’s injecting him with the testosterone she’s scored from her stint in a veterinary practice, are after bigger, more recent booty: the $400 million Lydia’s former boss, con man Jimmy Jones, had skimmed from Benthic Exploration and managed to hide somewhere before Nickelby’s testimony helped send him to prison, where he was killed a few weeks ago. As Ford’s search for the searchers leads him first to dive-shack owner Tamarinda Constance then to Hubert "Sandman" Purcell, the trawler captain she spurned, his old pal Seagard Tomlinson learns that Ford’s not the only one looking for the people who are looking for the treasure. From this point on, felonies pop up faster than barnacles on a boat’s hull. So many characters are hiding so many secrets that so many other characters learn something about that it’s no surprise to find ad hoc alliances sprouting and dissolving hours later. The extravagant criminal tally includes impersonation, abduction, assault and battery, the reckless operation of seagoing vessels, and enough homicide to seriously thin the cast of treasure hunters and the people hunting them.

Despite the reflective tone of the tale, the plot is driven by so many boats moving at such top speeds that you have to hope there are no sharks in the neighborhood. If there are, poor them.