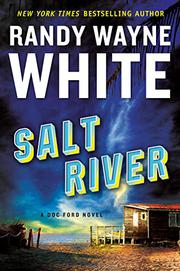 Delia Carapoulos is a beautiful young woman, a recent graduate of Eckerd College, a starry-eyed fan of Tomlinson's, and also, according to her, his biological daughter, a revelation that shocks him out of his desultory amatory fantasies about the nubile visitor. In fact, she’s only the advance guard of a tidal wave of offspring made possible by Tomlinson’s endless sperm donations a generation ago. Now the anything-but-proud papa’s data has been released to several of the children looking to track him down, not all of them happy about the news of their paternity. One reputed son, Jayden F. Griffin, makes such an impression on his arrival at Sanibel that he’s hauled off by the feds and charged with terrorism and murder. By the time Tomlinson finally appeals to Doc Ford for help, his buddy is awash in an equally unwelcome reprise of his own past: the appearance of several variously threatening characters convinced that he can lead them to late, legendary treasure hunter Jimmy Jones’ lost millions. All right, Leo Alomar, the first of these latest intruders into Doc’s life, isn’t really a special investigator with the IRS’s Whistleblower Program. But Rayvon Darwin, the lover of Alomar’s estranged wife, Nanette, really is a lieutenant with the Nassau customs agency, and Doc’s only hope of thwarting his search for Lydia Johnson, the treasure hunter’s widow Doc helped to disappear, may be to assume the role of Morris Berg, the informant Ray wants to engage to get information that will sink Doc—unless of course he discovers that Morris and Doc are one and the same.

The plot, like so many of Doc’s recent adventures, tends to wind down rather than up, but a good time is had by all.