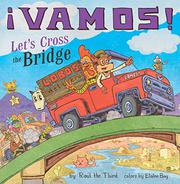 From the World of ¡Vamos! series

Little Lobo and his friends make another appearance in Raúl the Third’s latest installment in the World of ¡Vamos! series. Like “thousands of people [who] cross from one side of the bridge to the other,” Little Lobo heads over from one country to the other, bound for “la gran celebración” with party supplies and a band made up of frogs and a snake who rattles a maraca. As the hours go by and the group waits for their turn to cross the bridge, “the day turns into night,” and the characters begin to lose their patience and get hungry. But there are food trucks in line too! Soon Little Lobo and his friends discover the smorgasbord of culinary options around them and that so long as you have good friends and good music, you can have a party anywhere. Like the other books in the series, this outing excels in its inclusion of cultural references in its illustrations: Cantinflas, El Chavo del Ocho’s barrel, tuna-fruit vendors, T-shirts displaying El Paso’s area code, and the Juárez X are only some of the details that Raúl the Third gets right about life and culture in the depicted area. Spanish vocabulary is intertwined throughout the text as well as appearing in both the occasional labels in the illustrations and the handy glossary at the end. The iconic illustration style is enhanced by Bay’s colors, which bring the vibrant spirit of the border to the page. (This book was reviewed digitally.)