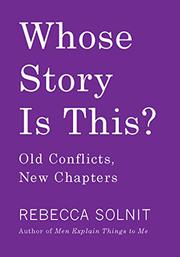 WHOSE STORY IS THIS?

Readers familiar with Solnit’s most recent collections of essays, Call Them by Their True Names, the winner of the 2018 Kirkus Prize for Nonfiction, will find more of the same here, laced with even more scathing and harsh assessments of our world today. In a series of sharp pieces, the author dissects a variety of timely topics, especially the sexual harassment and discrimination of women and the #MeToo movement as well as Native American rights, the anti-gun movement, white nationalism, Black Lives Matter, and climate change. Solnit argues that we live in a transformative time: “You can see change itself happening, if you watch carefully and keep track of what was versus is.” She wants to build “new cathedrals for new constituencies.” The names may have changed, but for Solnit, the stories remain the same. After recalling being sexually harassed by a cook when she was a busgirl, she goes on to discuss Harvey Weinstein and how some men in power can go to “extraordinary lengths to make somebodies into nobodies,” noting “that truth, like women, can be bullied into behaving.” In “Voter Suppression Begins at Home,” Solnit recounts personally observing how husbands can “bully and silence and control their wives,” even with mail-in ballots. She takes on Brett Kavanaugh and Jian Ghomeshi, formerly with CBC, over the “long, brutal tradition of asserting that men are credible but women are not.” She praises Christine Blasey Ford as a “welcome earthquake” for speaking out at the Kavanaugh hearing. The author also praises Alexandria Ocasio-Cortez for her Green New Deal and those who helped remove Confederate statues around the country—though she bemoans the fact “that there are only five statues of named women in New York City.” Donald Trump, that “dirtbag dragon,” is often held up for scorn.

Despite some repetition, Solnit’s passionate, shrewd, and hopeful critiques are a road map for positive change. Keep these collections coming.