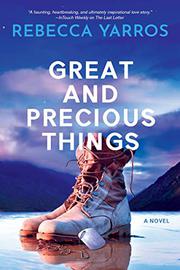 A father’s request leads a soldier back to his hometown and the woman he thought he’d lost forever in Yarros’ (The Last Letter, 2019, etc.) novel.

Growing up in the small town of Alba, Colorado, Camden “Cam” Daniels had a reputation as a troublemaker. After high school, he became a Green Beret and inspired his brother, Sullivan, to join the Army. When a split-second decision on the battlefield ends with Sullivan’s death, the dead soldier’s father, Arthur, and the town of Alba can’t forgive Cam. Six years later, however, Cam receives a voicemail message from his father. At 58, Arthur is dealing with the devastating effects of early-onset Alzheimer’s disease and wants Cam to help him get the “do not resuscitate” order opposed by his elder son, Alexander, known as “Xander,” who’s become Alba’s mayor. Cam returns to Alba and encounters Willow Bradley, his childhood friend and Sullivan’s former girlfriend. He loves Willow but didn’t reveal it after she began dating his brother, and he’s unaware that she loves him, too. To garner support for his father’s case, Cam works with Willow to turn Alba’s historic Rose Rowan Mine into a tourist attraction, and their rekindled friendship turns passionate. But Cam wonders if their relationship can survive the pressures of his father’s court case and the town’s scrutiny. In chapters that alternate between Cam’s and Willow’s first-person perspectives, the romance develops at a slow burn as the couple struggles to make peace with Cam’s guilt over Sullivan’s death and other issues. Although their relationship is the heart of the novel, Cam’s efforts to help his father and resolve their troubled past form a well-developed subplot as he and his brother prepare to face off in court. A gifted storyteller, Yarros captures well the rhythms of life in a once thriving town, and her book succeeds as both a contemporary romance and a sensitively observed story of a son trying to reconnect with his estranged father before it is too late.