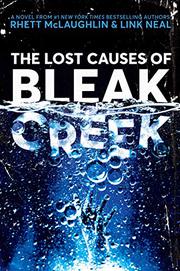 THE LOST CAUSES OF BLEAK CREEK

Comedy duo and YouTube superstars McLaughlin and Neal (Rhett & Link’s Book of Mythicality, 2017) craft a novel about things that go bump in the night.

Stranger Things carries a lot of cultural weight by itself these days—the legacy of Steven Spielberg, Stephen King, and the many weird movies and books that don’t get the credit they deserve—but these comedy writers have hit that vein hard with this VHS-era kicker that references the Jean-Claude Van Damme movie Kickboxer on the very first page. This is Bleak Creek, North Carolina, circa the early 1990s. We have three buddies, natch: Rex McClendon, whose dad owns a funeral home; his bestie, Lief Nelson; and their mutual crush, Alicia Boykins. They’re making PolterDog, an indie movie, because why not? Anyone who grew up in this era will be delighted by all the pop-culture references, from Goodfellas to Smokey and the Bandit. Of course, we need some reasonable adults around to help, too, so we get Janine Blitstein, a filmmaker just graduated from NYU film school, and her cousin Donna Lowe. Things get creepy in a hurry when Alicia is banished because of “bad behavior” to a local private school called Whitewood, founded in 1979. The big bad here is Wayne Whitewood, head of the school where every student is robbed of an identity and known only as “Candidatus”—Whitewood is the so-named “Keeper,” assisted by the Nurse Ratched–esque “Helper.” All the students are threatened at every turn by torture, most commonly “The Roll,” in which they’re confined in a carpet for days on end. Of course, there's a rescue mission, but because we’re in that Stephen King territory, there are also a bunch of supernatural threats, including a cursed spring and something known only as “The One Below.”