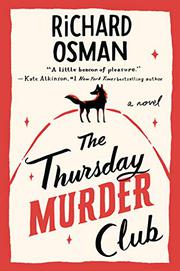 Four residents of Coopers Chase, a British retirement village, compete with the police to solve a murder in this debut novel.

The Thursday Murder Club started out with a group of septuagenarians working on old murder cases culled from the files of club founder Elizabeth’s friend Penny Gray, a former police officer who's now comatose in the village's nursing home. Elizabeth used to have an unspecified job, possibly as a spy, that has left her with a large network of helpful sources. Joyce is a former nurse who chronicles their deeds. Psychiatrist Ibrahim Arif and well-known political firebrand Ron Ritchie complete the group. They charm Police Constable Donna De Freitas, who, visiting to give a talk on safety at Coopers Chase, finds the residents sharp as tacks. Built with drug money on the grounds of a convent, Coopers Chase is a high-end development conceived by loathsome Ian Ventham and maintained by dangerous crook Tony Curran, who’s about to be fired and replaced with wary but willing Bogdan Jankowski. Ventham has big plans for the future—as soon as he’s removed the nuns' bodies from the cemetery. When Curran is murdered, DCI Chris Hudson gets the case, but Elizabeth uses her influence to get the ambitious De Freitas included, giving the Thursday Club a police source. What follows is a fascinating primer in detection as British TV personality Osman allows the members to use their diverse skills to solve a series of interconnected crimes.

A top-class cozy infused with dry wit and charming characters who draw you in and leave you wanting more, please.