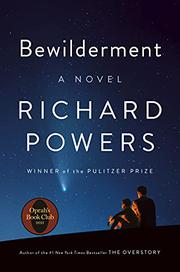 A widower pursues an unusual form of neurological therapy for his son in this affecting story.

Astrobiologist Theo Byrne, 45, looks for life in outer space while his 9-year-old son, Robin, seeks to protect endangered animals on Earth. Both are still grieving for the boy’s mother, Alyssa, an animal rights activist who died in a car accident two years ago as she swerved to avoid hitting an opossum. Since then, Robin has been subject to tantrums and violence and variously diagnosed with Asperger’s, OCD, and ADHD. Theo has resisted medication and turns to a university colleague who is experimenting with a neurological therapy. Powers has followed his awarding-winning, bestselling The Overstory (2018), a busy eco-epic featuring nine main characters, with this taut ecological parable borne by a small cast. It’s a darker tale, starting with an author’s note about Flowers for Algernon and continuing through Robin’s emotional maelstrom, Theo’s parental terrors, and, not far in the background, environmental and political challenges under a Trump-like president. Yet there are also shared moments of wonder and joy for a father and son attuned to science and nature and each other, as well as flashbacks that make Alyssa a vibrant presence. The empathy that holds this nuclear family together also informs Robin’s ceaseless concern and efforts on behalf of threatened species, just as the absence of empathy fuels the threat. As always, there’s a danger of preachiness in such stories. Powers generally avoids it by nurturing empathy for Robin. While the boy’s obsession with the fate of the planet’s nonhuman life can seem like religious fervor, it has none of the cant or self-interest. He is himself a rare and endangered species.

A touching novel that offers a vital message with uncommon sympathy and intelligence.