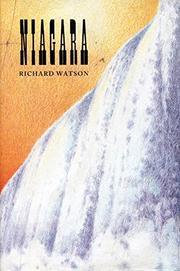 It's his story versus her story in Watson's latest (The Runner, 1982; The Philosopher's Diet, 1985, etc.) as two performers in turn-of-the-century Niagara Falls give separate versions of their mutual stunts—on a tightrope and in bed. Jean Francois Gravelet, a dapper Frenchman, was the first ever to cross Niagara Falls on a tightrope. Anna Edson Taylor, a widowed teacher from Nebraska, was the first to ride over the falls in a barrel. In Watson's scenario, these two daredevils meet up and spend several weeks together in—take your choice—a passionate, adventurous sexual relationship (Gravelet's version) or an intimate friendship (Taylor's version). Of course, the reader doesn't really have to choose between the two stories—added together, they're far more poignant than the sum of their parts. Gravelet is a man as rigid as the wire he walks on. He can never afford to let down his guard: ``I am what I told you,'' he declares. ``A perfect human being. A man who is not permitted to make a mistake.'' All this perfection can get a bit bland. Enter Taylor, a big, motherly woman ``with a round face plain as mud.'' If she begins to show us a softer, more likable aspect of Gravelet, it's not without a price. We understand, even as he does, that softness is death for a tightrope walker. Good stuff, as far as it goes, but Watson might easily have lifted these characters beyond their stereotypes. Strangely, what's missing most here, despite the title, is the compelling presence of Niagara Falls. It isn't only the hope of wealth and fame that has always drawn daredevils to Niagara—it's the power and rush and lure of those falls. We need to get a feel for that here. Otherwise, it's just a lot of plain water.