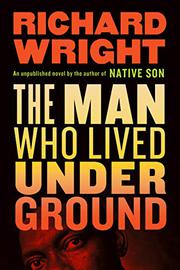 THE MAN WHO LIVED UNDERGROUND

A falsely accused Black man goes into hiding in this masterful novella by Wright (1908-1960), finally published in full.

Written in 1941 and '42, between Wright’s classics Native Son and Black Boy, this short novel concerns Fred Daniels, a modest laborer who’s arrested by police officers and bullied into signing a false confession that he killed the residents of a house near where he was working. In a brief unsupervised moment, he escapes through a manhole and goes into hiding in a sewer. A series of allegorical, surrealistic set pieces ensues as Fred explores the nether reaches of a church, a real estate firm, and a jewelry store. Each stop is an opportunity for Wright to explore themes of hope, greed, and exploitation; the real estate firm, Wright notes, “collected hundreds of thousands of dollars in rent from poor colored folks.” But Fred’s deepening existential crisis and growing distance from society keep the scenes from feeling like potted commentaries. As he wallpapers his underground warren with cash, mocking and invalidating the currency, he registers a surrealistic but engrossing protest against divisive social norms. The novel, rejected by Wright’s publisher, has only appeared as a substantially truncated short story until now, without the opening setup and with a different ending. Wright's take on racial injustice seems to have unsettled his publisher: A note reveals that an editor found reading about Fred’s treatment by the police “unbearable.” That may explain why Wright, in an essay included here, says its focus on race is “rather muted,” emphasizing broader existential themes. Regardless, as an afterword by Wright’s grandson Malcolm attests, the story now serves as an allegory both of Wright (he moved to France, an “exile beyond the reach of Jim Crow and American bigotry”) and American life. Today, it resonates deeply as a story about race and the struggle to envision a different, better world.

A welcome literary resurrection that deserves a place alongside Wright’s best-known work.