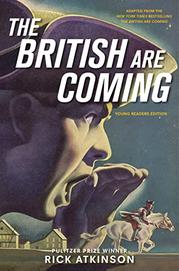 by Rick Atkinson with Kate Waters

A young readers’ adaptation of the 2019 bestseller by Pulitzer Prize–winning author Atkinson.

Aided by Waters, Atkinson cuts close to 600 pages of text from the original in this work for middle-grade readers about the start of the Revolutionary War. Atkinson’s research is exemplary. His account traces the start of the war in both Boston and England in the years before fighting began; covers well-known battles such as Lexington, Concord, and Bunker Hill; and also spends significant time on the conflicts in Canada and South Carolina that, while less famous, were important to the shape and flow of the war. Atkinson has a gift for detail and description—when a soldier fires into a river, “the white splash rose as if from a thrown stone”—however the beauty of both are shorn away here. The challenge is that the book tries to cover nearly as many major events as the adult version that is nearly three times its length—and what gets cut are the juicy bits. Readers are left with a dry tome recounting tactics and battles. It becomes impossible to keep track of the generals, much less the incredible number of named ships, and many individuals are not fleshed out enough to come to life in readers’ minds.

Dry as old bones; will unfortunately convince children that history is boring.