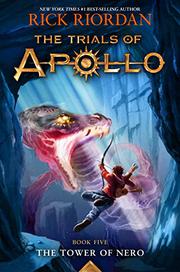 THE TOWER OF NERO

From the Trials of Apollo series, volume 5

In this tumultuous series closer, Apollo, transformed into a mortal teenager, takes on both a deified emperor in a luxurious Manhattan high-rise and an older adversary.

Lester/Apollo’s coast-to-coast quest reaches its climactic stage as, with help from both eager squads of fledgling demigods from Camp Half-Blood and reluctant allies from realms deep below New York, he invades the palatial lair of Emperor Nero—followed by a solo bout with another foe from a past struggle. Riordan lays on the transformation of the heedless, arrogant sun god to a repentant lover of his long-neglected semidivine offspring and of humanity in general, which has served as the series’ binding theme, thickly enough to have his humbled narrator even apologizing (twice!) to his underwear for having to change it periodically. Still, the author delivers a fast, action-driven plot with high stakes, lots of fighting, and occasional splashes of gore brightened by banter and silly bits, so readers aren’t likely to mind all the hand-wringing. He also leaves any real-life parallels to the slick, megalomaniacal, emotionally abusive Nero entirely up to readers to discern and dishes out just deserts all round, neatly tying up loose ends in a set of closing vignettes. The supporting cast is predominantly White, with passing mention of diverse representation.

A brisk, buffed-up finish threaded with inner and outer, not to mention sartorial, changes.