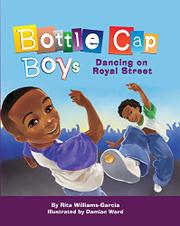 The tale of two brothers who have a tip-top, tapping time on the streets of New Orleans.

Rudy, wearing a green-sleeved T-shirt, and his brother Randy, wearing purple, meet on Royal Street, press bottle caps into the bottoms of their white tennis shoes, and the duel commences. They tap dance for audiences large and small, the rhyming text echoing the rhythms of their movement. To help readers keep track of the back-and-forth dialogue, each boy’s words are set in type that matches his shirt color. The text makes clear the goal of this duel: “who dances best / Eats good tonight.” Beignets, pralines, red beans, jambalaya, and “po’boys for poor boys” will constitute their feast, and they plan to save a seat on the trolley for Mama. Williams-Garcia tells an important story of how many industrious African-American boys in New Orleans make money entertaining tourists, but readers who expect the brilliance of One Crazy Summer (2010) and its sequels will find this picture book a disappointment. Lackluster illustrations that flatten out rather than enhance the racial and ethnic diversity of the spectators detract further from the book’s appeal. Williams-Garcia ends with a note about her experiences with New Orleans bottle-cap boys and provides a culinary glossary for those unfamiliar with Creole and Cajun cuisine.

An important story that just doesn’t quite come together.