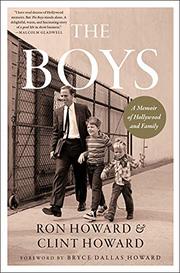 A Memoir of Hollywood and Family

Brotherly coming-of-age reflections from a storied life in show business.

The glowing foreword, by Bryce Dallas Howard, sets the tone for this forthright memoir from her father, Ron, and his younger brother, Clint. Both were primed for the entertainment industry from a young age by beloved Oklahoman parents Rance Howard and Jean Speegle, self-proclaimed “sophisticated hicks” who relocated to New York City in their youth and embarked on a “rich and strange” journey to realize their own showbiz aspirations. Written in alternating segments, the brothers offer crisp, mostly interesting insights into their separate trajectories into the entertainment business. Ron writes about being diligently prepped for screen tests near his fourth birthday by his father, who taught both sons to “understand a scene in an emotional language,” while Clint notes that both were spared becoming “Hollywood casualties” due to the values their parents instilled in them. The authors chronicle the ups and downs of lifetimes in acting—early on, Ron in the Andy Griffith Show and Happy Days, and Clint in an episode of Star Trek before Gentle Ben—as well as belonging to a household fully ensconced in the entertainment industry. Despite a competitive edge between them—which still remains, as Clint acts in many of Ron’s directorial productions—as they struggled up the Hollywood ladder, their familial bond remained strong. Both brothers add some behind-the-scenes snippets; for example, Ron discusses his newfound adulthood appreciation for Andy Griffith while he shot isolated scenes for Return to Mayberry. For the most part, the binary autobiographical approach works, with the alternating commentaries and interpreted memories from each author offering divergent yet complementary perspectives. A treat for movie and TV buffs, this dual memoir is wholesome and satisfying.

Fans of the Howards will revel in the details of their young ascents into the Hollywood spotlight.