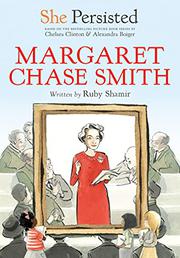 From the She Persisted series

One of the least-known members of the original She Persisted pantheon gets her due.

Margaret Chase was born in the mostly White mill town of Skowhegan, Maine, in 1897. From girlhood, she was a hard worker, first in the home (she was the oldest of six) and then in the community. A job as a telephone operator cultivated what would much later be called networking skills, and thanks to her work ethic and confident independence, she became a leader among professional women both local and statewide and won election to the town council twice. In 1930, she married local politician Clyde Smith, masterfully running his successful campaign for Congress. When he died, she ran for—and won—his seat, serving in Congress for several terms before winning election to the Senate. It was there, as a freshman Republican senator, that she faced down Joseph McCarthy and his enablers with her “Declaration of Conscience” speech. Though Shamir neglects to name the speech, she provides a cogent, age-appropriate summary of McCarthyism as well as giving her young readers an excellent overview of U.S. electoral politics and the structure of the federal government. She also makes clear the unique challenges that Smith faced as a woman in mostly male spaces throughout her career, up to her 1964 run for the Republican nomination for president.