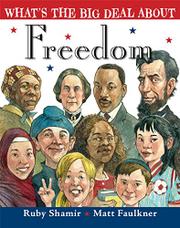 WHAT'S THE BIG DEAL ABOUT FREEDOM

Shamir offers an investigation of the foundations of freedoms in the United States via its founding documents, as well as movements and individuals who had great impacts on shaping and reshaping those institutions.

The opening pages of this picture book get off to a wobbly start with comments such as “You know that feeling you get…when you see a wide open field that you can run through without worrying about traffic or cars? That’s freedom.” But as the book progresses, Shamir slowly steadies the craft toward that wide-open field of freedom. She notes the many obvious-to-us-now exclusivities that the founding political documents embodied—that the entitled, white, male authors did not extend freedom to enslaved African-Americans, Native Americans, and women—and encourages readers to learn to exercise vigilance and foresight. The gradual inclusion of these left-behind people paints a modestly rosy picture of their circumstances today, and the text seems to give up on explaining how Native Americans continue to be left behind. Still, a vital part of what makes freedom daunting is its constant motion, and that is ably expressed. Numerous boxed tidbits give substance to the bigger political picture. Who were the abolitionists and the suffragists, what were the Montgomery bus boycott and the “Uprising of 20,000”? Faulkner’s artwork conveys settings and emotions quite well, and his drawing of Ruby Bridges is about as darling as it gets. A helpful timeline and bibliography appear as endnotes.

A reasonably solid grounding in constitutional rights, their flexibility, lacunae, and hard-won corrections, despite a few misfires.