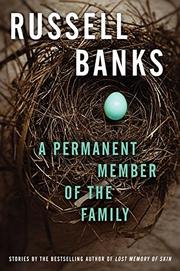 A PERMANENT MEMBER OF THE FAMILY

Don’t expect atmospheric mood poems or avant-garde stylistic games in these dozen tales. Banks is a traditionalist, interested in narrative and character development; his simple, flexible prose doesn’t call attention to itself as it serves those aims. The intricate, not necessarily permanent bonds of family are a central concern. The bleak, stoic “Former Marine” depicts an aging father driven to extremes because he’s too proud to admit to his adult sons that he can no longer take care of himself. In the heartbreaking title story, the death of a beloved dog signals the final rupture in a family already rent by divorce. Fraught marriages in all their variety are unsparingly scrutinized in “Christmas Party,” Big Dog” and “The Outer Banks." But as the collection moves along, interactions with strangers begin to occupy center stage. The protagonist of “The Invisible Parrot” transcends the anxieties of his hard-pressed life through an impromptu act of generosity to a junkie. A man waiting in an airport bar is the uneasy recipient of confidences about “Searching for Veronica” from a woman whose truthfulness and motives he begins to suspect, until he flees since “the only safe response is to quarantine yourself.” Lurking menace that erupts into violence features in many Banks novels, and here, it provides jarring climaxes to two otherwise solid stories, “Blue” and “The Green Door.” Yet Banks quietly conveys compassion for even the darkest of his characters. Many of them (like their author) are older, at a point in life where options narrow and the future is uncomfortably close at hand—which is why widowed Isabel’s fearless shucking of her confining past is so exhilarating in “SnowBirds,” albeit counterbalanced by her friend Jane’s bleak acceptance of her own limited prospects.