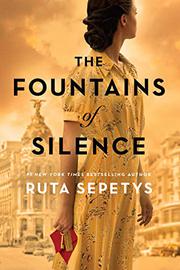 THE FOUNTAINS OF SILENCE

The pitiless dictatorship of Francisco Franco examined through the voices of four teenagers: one American and three Spaniards.

The Spanish Civil War lasted from 1936-1939, but Franco held Spain by its throat for 36 years. Sepetys (Salt to the Sea, 2016, etc.) begins her novel in 1957. Daniel is a white Texan who wants to be a photojournalist, not an oilman; Ana is trying to work her way to respectability as a hotel maid; her brother, Rafael, wants to erase memories of an oppressive boys’ home; and Puri is a loving caregiver for babies awaiting adoption—together they provide alternating third-person lenses for viewing Spain during one of its most brutally repressive periods. Their lives run parallel and intersect as each tries to answer questions about truth and the path ahead within a regime that crushes any opposition, murders dissidents, and punishes their families while stealing babies to sell to parents with accepted political views. This formidable story will haunt those who ask hard questions about the past as it reveals the hopes and dreams of individuals in a nation trying to lie its way to the future. Meticulous research is presented through believable, complex characters on the brink of adulthood who personalize the questions we all must answer about our place in the world.