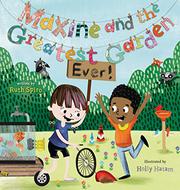 MAXINE AND THE GREATEST GARDEN EVER

Maxine, a science-oriented little White girl with a pet goldfish, loves to read and make constructive gadgets. Her friend Leo, a little Black boy, also likes making things, though from an artistic perspective. Together they decide to carefully design a garden. Maxine creates a practical blueprint while Leo draws a colorful diagram. Both plans allow them to plot, dig, and plant a beautiful and expansive space that includes a pond for Milton, Maxine’s pet fish. After their produce begins to sprout, however, some unwanted visitors slink in to ravage the fruits of all their hard work. Oh, no—now they need a new idea to keep those critters away. An average scarecrow doesn’t do the trick, so the kids get to work and build a “critter-creeping, laser-tripping, disco-ball-blinking, tuba-tooting… / SUPER SPECTACULAR SCARECROW!” But it only makes things worse by loudly disturbing everyone but their animal invaders. Initial disappointment and failure lead to blame and argument and then remorse and apologies. Both Maxine and Leo realize that “it takes a long time to grow a garden…but even longer to grow a friend.” Hatam offers kids lots of minutiae to look at, including clever endpapers with comical one-liners (“Thyme to Turnip the Beet”). Her detailed, animated, vibrant drawings accentuate the drama and neatly depict the concluding message that celebrates compromise. (This book was reviewed digitally with 9-by-17-inch double-page spreads viewed at 62.7% of actual size.)

Kids will enjoy the quirky visuals while appreciating the creative relationship of these two companions.