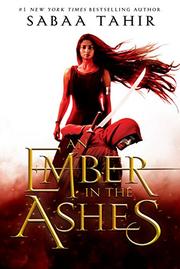 AN EMBER IN THE ASHES

From the Ember in the Ashes series, volume 1

A suddenly trendy trope—conflict and romance between members of conquering and enslaved races—enlivened by fantasy elements loosely drawn from Arabic tradition (another trend!).

In an original, well-constructed fantasy world (barring some lazy naming), the Scholars have lived under Martial rule for 500 years, downtrodden and in many cases enslaved. Scholar Laia has spent a lifetime hiding her connection to the Resistance—her parents were its leaders—but when her grandparents are killed and her brother’s captured by Masks, the eerie, silver-faced elite soldiers of the Martial Empire, Laia must go undercover as a slave to the terrifying Commandant of Blackcliff Military Academy, where Martials are trained for battle. Meanwhile, Elias, the Commandant’s not-at-all-beloved son, wants to run away from Blackcliff, until he is named an Aspirant for the throne by the mysterious red-eyed Augurs. Predictably, action, intrigue, bloodshed and some pounding pulses follow; there’s betrayal and a potential love triangle or two as well. Sometimes-lackluster prose and a slight overreliance on certain kinds of sexual violence as a threat only slightly diminish the appeal created by familiar (but not predictable) characters and a truly engaging if not fully fleshed-out fantasy world.

Bound to be popular.