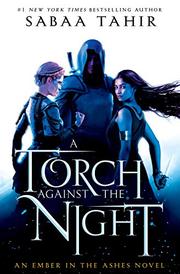 A TORCH AGAINST THE NIGHT

From the Ember in the Ashes series, volume 2

Tahir’s follow-up to An Ember in the Ashes (2015) picks up right where Volume 1 left off, ratcheting up the tension (military and sexual) as well as the magic, the violence, and the stakes.

Laia (golden-eyed, dark-haired, magically gifted) and Elias (gray-eyed, “golden-brown”–skinned soldier extraordinaire) have fled Blackcliff, determined to rescue Laia’s imprisoned brother and potentially spur a Scholar rebellion, while icy, Aryan Helene, now Blood Shrike and second in power only to sadistic Emperor Marcus, must determine where her loyalty lies. Complex plots and counterplots exist in every corner, and all three main characters, but especially Helene and Elias, must constantly grapple with the cost of power and the price of victory. Powerful females in charge of their lives and their bodies abound, even if their boy-laden conversations rarely pass the Bechdel test. Tahir pulls few punches: brutal deaths occur and characters make choices that cause pain and suffering. But hope exists, and readers will be torn between the vivid, oppositional characters. Laia, shaping up to be a chosen one, ironically has the least compelling arc, but there are hints that her future will change that. Diversity exists in this Roman-Arabian fantasy world, but racial categories do not have one-to-one correspondence with our own.

An excellent continuation of a series seemingly designed for readers of the political, bloody fantasy style du jour, set apart by an uncommon world.