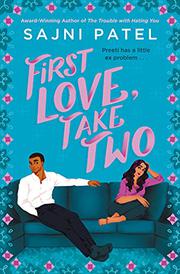 A doctor is forced to reexamine her own hurts when she gets a second chance at a relationship with the love of her life.

Houston-based doctor Preeti Patel is juggling multiple anxieties: Not only does she need to find a new apartment, but she's in the middle of hunting for a permanent position as a medical resident. She locates a place where she can stay until she gets a job, but she has to share it with her ex-boyfriend Daniel Thompson for a few weeks. Preeti has been assiduously avoiding Daniel since she broke up with him six years ago without giving a reason. But while living in close quarters with Daniel, she's forced to accept her feelings for him and finds herself compelled to reevaluate her priorities and give him honest answers about their past. Preeti’s struggles with anxiety are illustrated in graphic detail, but the dynamics of her relationship with Daniel, which hinges more on the memories of a previous connection than on any significant development in the present, remain less well developed. Preeti’s interactions with her friends and family are occasionally fun and heartwarming, and the characters’ penchant for long emotional monologues are reminiscent of melodramatic Bollywood films. But author Patel is sharply insightful when she hints at the complex links among religion, roots, and community in the Hindu Indian diaspora and exposes the fault lines in several of these communities, particularly the deeply entrenched racism and sexism that sometimes fracture them.

An uncomplicated and often one-note romance uplifted by evocative descriptions of its social and cultural setting.