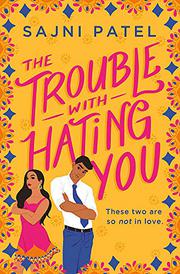 THE TROUBLE WITH HATING YOU

A biochemical engineer ends up working with the man her parents would like her to marry.

Liya Thakkar is happy both professionally and personally. She has a tight-knit group of friends and just accepted a big promotion at work. Unfortunately, her conservative father is still trying to arrange her perfect match—a good Hindu man from a respectable family—even though she never plans to get married. One night, Liya goes to her parents’ home for a quiet family dinner and is surprised to find her father has invited a surprise blind date, Jay Shah. Infuriated at her father’s meddling, Liya refuses to even meet Jay and sneaks out the back door. But running away from Jay is harder than it looks, as he’s been hired to bail her firm out of a daunting legal mess. As they work together to save the company, Liya discovers that the prickly, confrontational demeanor she uses as a shield doesn’t work with Jay. Meanwhile, Jay is surprised to find himself impressed with Liya's dedication and hard work. Liya is slow to trust Jay, but their professional relationship slowly evolves to friendship and then to romance. As a teenager, Liya was a victim of sexual assault at the hands of an older, respected member of the community. It makes her fight-or-flight survival strategy easier to understand, but she never moves past these simple coping mechanisms. The book fails to portray a modern world of dating. Early on, a white man expects her “to give it up” after an expensive dinner date, and she is openly shunned by her community for being a sexually active woman in her 20s. There is little nuance in Patel’s exploration of gender and dating, which fuels rather than interrogates stereotypes of South Asian culture.