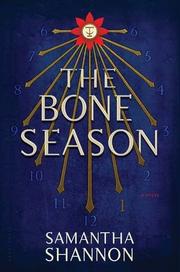 From the Bone Season series, volume 1

A futuristic novel that presents an alternative universe of seers, soothsayers and even such esoterica as rhabdomancers—and their enemies.

The year is 2059—using the Scion calendar, that is—and the future is not a happy one. Paige Mahoney is 19, narrator of the story and a “dreamcatcher” at the top of the seven orders of clairvoyance. Her status means she has greater sensitivity to and control of the “aether,” a higher plane of existence and something that gets her in big trouble when her spirit winds up flying out of her body and killing an Underguard. (Not only is the universe Shannon creates an alternative one, but so is the vocabulary. One gets used to deciphering such sentences as, “The idea that the Rephaim fed on aura just didn’t compute. It was a link to the aether, unique to each voyant.” An extensive glossary at the end of the novel helps with this decoding.) Paige is caught, given a strong dose of "flux" and taken to the “Lost City” of Oxford, where she’s confined to the Residence of Magdalen. There she meets Nashira Sargas, the “blood-sovereign of the Race of Rephaim,” who are all clairvoyants (in contrast to the Amaurotics, or nonclairvoyants). Paige’s name is changed to XX-59-40, and she comes under the control of Arcturus, Warden of the Mesarthim, who becomes her “keeper.” Nashira explains to Paige the existence of the Emim, “mindless, bestial creatures with a taste for human flesh.” Every 10 years, the Rephaim “harvest” the clairvoyants to help them control the Emim, and these harvests are called Bone Seasons.

The first of a projected set of seven novels, this book is for those who like their dystopian science fiction multilayered, philosophical and complex to the point of impenetrability.