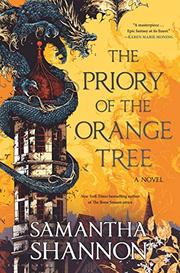 THE PRIORY OF THE ORANGE TREE

After 1,000 years of peace, whispers that “the Nameless One will return” ignite the spark that sets the world order aflame.

No, the Nameless One is not a new nickname for Voldemort. Here, evil takes the shape of fire-breathing dragons—beasts that feed off chaos and imbalance—set on destroying humankind. The leader of these creatures, the Nameless One, has been trapped in the Abyss for ages after having been severely wounded by the sword Ascalon wielded by Galian Berethnet. These events brought about the current order: Virtudom, the kingdom set up by Berethnet, is a pious society that considers all dragons evil. In the East, dragons are worshiped as gods—but not the fire-breathing type. These dragons channel the power of water and are said to be born of stars. They forge a connection with humans by taking riders. In the South, an entirely different way of thinking exists. There, a society of female mages called the Priory worships the Mother. They don’t believe that the Berethnet line, continued by generations of queens, is the sacred key to keeping the Nameless One at bay. This means he could return—and soon. “Do you not see? It is a cycle.” The one thing uniting all corners of the world is fear. Representatives of each belief system—Queen Sabran the Ninth of Virtudom, hopeful dragon rider Tané of the East, and Ead Duryan, mage of the Priory from the South—are linked by the common goal of keeping the Nameless One trapped at any cost. This world of female warriors and leaders feels natural, and while there is a “chosen one” aspect to the tale, it’s far from the main point. Shannon’s depth of imagination and worldbuilding are impressive, as this 800-pager is filled not only with legend, but also with satisfying twists that turn legend on its head. Shannon isn’t new to this game of complex storytelling. Her Bone Season novels (The Song Rising, 2017, etc.) navigate a multilayered society of clairvoyants. Here, Shannon chooses a more traditional view of magic, where light fights against dark, earth against sky, and fire against water. Through these classic pairings, an entirely fresh and addicting tale is born. Shannon may favor detailed explication over keeping a steady pace, but the epic converging of plotlines at the end is enough to forgive.

A celebration of fantasy that melds modern ideology with classic tropes. More of these dragons, please.