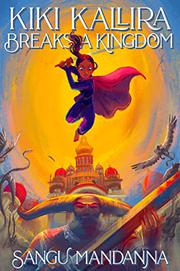 Eleven-year-old Kritika “Kiki” Kallira lives in London with her Mum, an immigrant from the state of Karnataka in the south of India; she’s never met her father, who died before she was born. Kiki’s mother is an animator, and Kiki, who struggles with anxiety and spiraling, obsessive thoughts, finds solace in sketching in her notebooks and imagining stories, especially ones inspired by the Hindu mythology they’ve shared. Now, though, Kiki has unleashed the Asura king Mahishasura from his exile through the drawings in her sketchbook. As she travels and travails between London and Mysore, the heroes and demons she’s sketched come to life, and she is faced with seemingly insurmountable tasks and complex obstacles. In her quest to save the world, Kiki shows readers the power of asking for help, believing in oneself, and overcoming fear. The worldbuilding is full of vibrant images and detailed descriptions about Mahishasura’s kingdom and palace, Lalith Mahal. The novel draws inspiration primarily from the story of Mahishasura—who wanted to be immortal—and how he was defeated by the goddess Chamundeshwari. Anxiety and mental health are also explored with honesty and finesse; many young readers will resonate with her struggle to quiet demons both internal and external.

An action-packed, evocative portrayal of courage, friendship, and belonging.