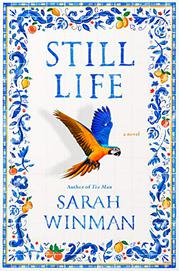 An epic about a family of friends who make the city of Florence their home in the mid-to-late 20th century.

Evelyn Skinner, an art teacher and Englishwoman approaching 64 years of age, meets Ulysses Temper, a 24-year-old private from London, on the side of an Italian road in 1944, while bombs are falling on distant hills. At its core, this slowly unfolding narrative is the story of their friendship, though it is also a story of the creation of a family of friends, transplanted from London to Italy: pub owner Col; pub worker, amateur singer, and eventual mother Peg; pianist Pete; elderly friend Cressy; child Alys; a bright blue parrot, Claude; and ultimately, of course, Evelyn. This story winds and wanders through the years, in the end covering 1901 to 1979, as Ulysses and Cressy establish a successful pensione in Florence, Alys grows up, and Evelyn and the others grow older. This is a slow-paced narrative that unfolds as a love story to Florence and a love story to love—romantic, platonic, familial, parental, friend, community, Sapphic, and gay love are all celebrated. Art history is often mentioned, as are parallels to the pensione in E.M. Forster’s A Room With a View. While this is a book to settle into, the narrative feels almost breathless at times, in part due to the lack of quotation marks around the dialogue, which makes it feel as if the unknown narrator is relating a long story deep into the night.

An unexpected treatise on the many forms love and beauty can take, set against the backdrop of Florence.