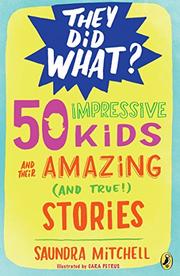 50 IMPRESSIVE KIDS AND THEIR AMAZING (AND TRUE!) STORIES

From the They Did What? series

Why should grown-ups get all the historical, scientific, athletic, cinematic, and artistic glory?

Choosing exemplars from both past and present, Mitchell includes but goes well beyond Alexander the Great, Anne Frank, and like usual suspects to introduce a host of lesser-known luminaries. These include Shapur II, who was formally crowned king of Persia before he was born, Indian dancer/professional architect Sheila Sri Prakash, transgender spokesperson Jazz Jennings, inventor Param Jaggi, and an international host of other teen or preteen activists and prodigies. The individual portraits range from one paragraph to several pages in length, and they are interspersed with group tributes to, for instance, the Nazi-resisting “Swingkinder,” the striking New York City newsboys, and the marchers of the Birmingham Children’s Crusade. Mitchell even offers would-be villains a role model in Elagabalus, “boy emperor of Rome,” though she notes that he, at least, came to an awful end: “Then, then! They dumped his remains in the Tiber River, to be nommed by fish for all eternity.” The entries are arranged in no evident order, and though the backmatter includes multiple booklists, a personality quiz, a glossary, and even a quick Braille primer (with Braille jokes to decode), there is no index. Still, for readers whose fires need lighting, there’s motivational kindling on nearly every page.

A breezy, bustling bucketful of courageous acts and eye-popping feats.