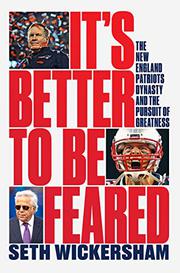 IT'S BETTER TO BE FEARED

The New England Patriots Dynasty and the Pursuit of Greatness

A deep dive into the modern New England Patriots, the most successful NFL franchise of the past 20 years.

As a quarterback, Tom Brady has always been known for his public face, one of confidence, optimism, and overall good cheer. There are darker moments, writes ESPN correspondent Wickersham, and numerous episodes where team player Brady showed an overinflated ego. “Fans knew little about his demons and insecurities,” he writes, “and the fact that low-rung staffers—invisible servants—seemed to hold a level of contempt for Brady not only revealed him as a perfectionist who couldn’t handle mistakes, but also as a man keenly aware of the discrepancy in stature.” That discrepancy owed to a long, tortuous relationship with head coach Bill Belichick, emotionally aloof even as Brady was emotionally needy, and of a mindset that held that football players, no matter how brilliant, were mere employees. For all the head-butting, Brady and Belichick crafted a team that, though not without problems, developed an enviable record. Wickersham’s fly-on-the-wall accounts are fascinating, but he’s at his best when he explains, carefully and evenhandedly, how the business of football works. He also serves up the best account of “Deflategate,” the scandal whereby it was revealed that Brady, or at least his handlers, played with a game ball that was outside league specifications. Brady paid for the transgression with public humiliation, and so did Belichick, who traversed two narratives: “One said he was football’s smartest and most prepared coach; the other held that he would cross any line to win.” Brady’s anger that Patriots management didn’t shield him was one of many reasons that he left the team in 2020. As Wickersham suggests, now the narrative will turn to which of the two was most responsible for the Pats’ phenomenal run.

Exemplary sports journalism that examines the front office and dueling egos as much as the gridiron.