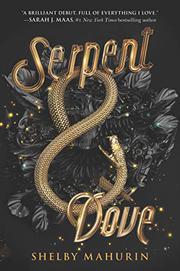 From the Serpent & Dove series, volume 1

A stealth witch and a devout witch hunter are forced to marry.

In this French-flavored fantasy world, witches are hunted down by the Church’s Chasseurs and burned at the stake; they retaliate against this genocidal crusade through vicious terrorist attacks. Thief Louise le Blanc wants none of that—she’s left her witch life behind. But Lou ends up on Chasseur captain Reid Diggory’s radar when a heist goes bad; his attempt to catch her lands them in a situation so compromising that the archbishop suggests marriage to save face. Lou’s initial priority is self-protection—wanting to avoid both fallout from the heist and a dangerous figure from her past—and she’s fine with using Reid. The slow-burn, opposites-attract romance between crass, irreverent Lou and prim and proper Reid gets very hot and sexy once it ignites. Lou sees firsthand the damages some witches do to innocents, has her presumptions about individual Chasseurs challenged, and also sees up close the horrors Chasseurs perpetrate. Despite occasional pacing hiccups and an easily guessed twist, the secondary characters will charm readers, and the story picks up when Lou’s past dangerously catches up to her, revealing the true stakes. Though at heart a romance, rich second-tier characters round out the shades-of-gray, morality-and-empathy themes. Witches, Chasseurs, and some secondary characters come in all colors; the leads appear white. The ending screams sequel.

Will cast a spell on romance fans.