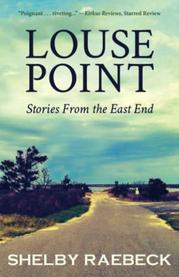 A short story collection that delves into the intricacies of love, family, marriage, and community in the East End of Long Island, New York.

Raebeck begins with “Dream Girls,” about a family coping with grief. Fourteen-year-old Ricky’s mother has died, but he still sees her as an apparition in the bathroom; he talks to her about his life and how he and the family are getting on in the aftermath of her death. In “Walking Dunes,” Darlene’s husband leaves her, and she chases after him, dragging her daughter and son along with her. Later in the collection, “Wiborg” shows how a woman’s close relationship to the land has caused a rift in her family. There’s an ongoing theme of loss and division in these tales—of people yearning for each other but unable to bridge the gap caused by their circumstances. This is especially apparent in the titular story, in which an adult Ricky describes how his sister, a single mother who just left a terrible relationship, begins to follow a similar pattern with Ricky’s 29-year-old stockbroker friend Babiak. In another story involving a troubled marriage, “Fremont’s Farewell” tells the tale of a teacher who tries to teach his students about what he feels are life’s most important lessons but instead reveals his own personal history. He describes spending the day with his son in a touching scene that’s effectively juxtaposed with his generally cynical point of view. Raebeck also has a talent for showing how characters play different roles in others’ lives, such as parents, siblings, and childhood friends. “Camp Hero” is about a teen named Lance who tries to push Ricky onto his family to fill the void he’s about to leave in their lives as he heads off to college. The story generates heartfelt sympathy for Lance, who wants to protect and provide for his loved ones but needs to go his own way, and Ricky, who’s kind but has his own problems.

A poignant and often riveting collection of small-town tales.