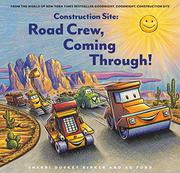 From the Construction Site series

There’s no crew like a familiar crew! Rinker’s perpetually cheery vehicles are back to build a road.

From construction crew to road crew, the intrepid heroes that first made their appearance in Goodnight, Goodnight, Construction Site, illustrated by Tom Lichtenheld (2011), have returned yet again, with Ford illustrating, as he has since 2018. In this new iteration, the team has settled in a land of mesas, cacti, and scrub. Joined by new vehicles Compacter, Scraper, Grader, Roller, Striper, Water Truck, and Paver, they are given plans to construct a route “from here…to there,” and there’s not a moment to lose. After all, this isn’t just any road. It’s a “SUPERHIGHWAY, MEGA ROAD!” The rhyming text follows each piece of equipment as they do their part in paving the dusty landscape. In the course of a day (or so it would appear) the road is finished. That cars and trucks are able to use it immediately strains at the tensile strength of adult credulity, but construction-loving tots won’t care a jot. And conflict-averse youngsters needn’t worry, as not a thing goes wrong. To offset some of the natural concerns regarding the construction of superhighways, the book takes care to include wildlife crossings within the illustrations and adds an explanation at the end about their necessity. Vehicles are identified with both male and female pronouns throughout. (This book was reviewed digitally.)

This is one road kids will be happy to travel again.