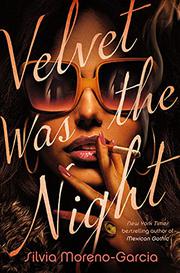 VELVET WAS THE NIGHT

An enforcer and a secretary search for a missing student in this explosive noir novel set in 1971 Mexico.

“Life’s a mess.” That’s the motto of Elvis, a 21-year-old man working as an enforcer for the Hawks, a government-sponsored black-ops group whose mission is to spy on, suppress, and harass left-wing protesters and activists. Elvis is in thrall to the group’s leader, El Mago, a mysterious but charismatic figure: “He was Elvis’s god, but a dark god. The god of the Old Testament, that, as a good Catholic boy, he’d learned to fear.” El Mago gives Elvis an assignment: Find a young college student named Leonora who’s gone missing along with some photos El Mago desperately wants. Elvis’ search leads him to a 30-year-old legal secretary named Maite who agreed to feed Leonora’s cat while she was gone and who is herself looking for Leonora. Moreno-Garcia follows both Elvis and Maite, who have a few things in common—they’re both avid readers, with Maite favoring romance magazines in particular, and they’re both suckers for old crooner-style music. They’re also both somewhat lonely, with Elvis’ only friend in the group out of commission after having been attacked at a protest and Maite despairing about ever finding a boyfriend. As they separately search for the missing Leonora and Elvis keeps an eye on Maite, they encounter a host of leftist activists, artists, secret police officers, a charming antiques store owner, and more, as their paths come ever closer to crossing. It’s hard to describe how much fun this novel is—Moreno-Garcia, whose Mexican Gothic (2020) gripped readers last year, proves to be just as good at noir as she is at horror. The novel features memorable characters, taut pacing, an intricate plot, and antiheroes you can’t help but root for.