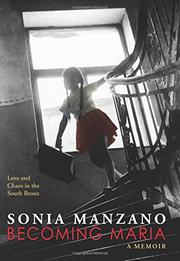 Love and Chaos in the South Bronx

Actress Manzano, best known as Maria from Sesame Street, provides a lyrical and unflinching account of her tough Nuyorican upbringing in the South Bronx.

Split into three parts, this touching memoir is a chronological series of vignettes in the author's life, starting with her earliest memories as a diaper-clad toddler witnessing her father's drunken outbursts and meeting a mysterious "dark little girl," who turns out to be her older half sister. The author doesn't give many dates or ages; her memories are fragments of her Spanglish-filled life in a large, poverty-stricken Puerto Rican family. She writes about the fear and confusion of having an abusive father and a battered mother doing the best she could with four kids to clothe and feed. She describes the communal shame of cousins and friends "ruined" by teen pregnancies. But her childhood isn't all grim. Manzano lovingly details life-changing moments: seeing West Side Story with a teacher and two other Latina classmates; visiting Puerto Rico, the place her parents fled but cherished; listening to a record of Richard Burton playing Hamlet; and later successfully auditioning for a spot in Manhattan's illustrious High School of Performing Arts. Life is full of tragedies and triumphs alike, and Manzano shows how both helped her become the actress that generations of children grew up seeing on Sesame Street.

In stark and heartbreaking contrast to her Sesame Street character, Manzano paints a poignant, startlingly honest picture of her youth