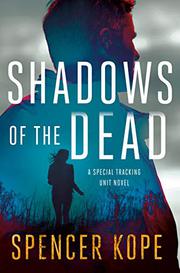 SHADOWS OF THE DEAD

An FBI agent with a gift to see Shine, a person’s essence, finds his tracking sense stymied when the killer he’s hunting plans his misdeeds through the dark web.

When Magnus Craig, better known as Steps, is called in on an unusual case on the Olympic Peninsula, surrounding a cabin in the woods and capturing its occupant is the easiest piece of what seems to be a grotesque puzzle. The occupant, who identifies himself only as Faceman, perseverates to the agents about how angry a mysterious “he” will be and where “number eight” has gone. Steps and his partner, Jimmy Donovan, conclude that Faceman, ne Murphy Haze Cotton, has been part of a plot to kidnap women, bring them to the remote cabin, and create death masks of the women’s last breaths. Based on Faceman’s ramblings, it appears that the woman discovered alive in the trunk of his car is No. 8, leaving it up to Steps and Jimmy to figure out the identities of seven victims, a possible motive, and the identity of the “he” Faceman has fingered as the orchestrator of the grander plot. Meanwhile, the bodies of the deceased have been turned into chemical sludge in barrels, so even matching dental records is unlikely. This is where Steps’ special gift comes in. After an early childhood trauma, Steps gained the ability to perceive Shine, an essential feature that serves as a unique identifier as well as a trail that shows where people are or have been. It’s made Steps a gifted human-hunter uniquely positioned to solve the case—until Steps and Jimmy realize that Faceman and his boss communicated over the dark web and the ringmaster could be anyone, anywhere. Combining online detection with studying some epically gross artifacts from the murder scene, Steps and Jimmy pool their talents to track the man behind Faceman.