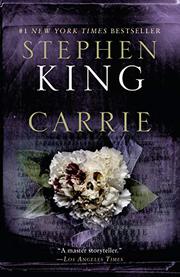 Figuratively and literally shattering moments of hoRRRRRipilication in Chamberlain, Maine where stones fly from the sky rather than from the hands of the villagers (as they did in "The Lottery," although the latter are equal to other forms of persecution).

All beginning when Carrie White discovers a gift with telekinetic powers (later established as a genetic fact), after she menstruates in full ignorance of the process and thinks she is bleeding to death while the other monsters in the high school locker room bait and bully her mercilessly. Carrie is the only child of a fundamentalist freak mother who has brought her up with a concept of sin which no blood of the Lamb can wash clean. In addition to a sympathetic principal and gym teacher, there's one girl who wishes to atone and turns her date for the spring ball over to Carrie who for the first time is happy, beautiful and acknowledged as such. But there will be hell to pay for this success—not only her mother but two youngsters who douse her in buckets of fresh-killed pig blood so that Carrie once again uses her "wild talent," flexes her mind and a complete catastrophe (explosion and an uncontrolled fire) virtually destroys the town.

King handles his first novel with considerable accomplishment and very little hokum—it's only too easy to believe that these youngsters who once ate peanut butter now scrawl "Carrie White eats shit." But as they still say around here, "Sit a spell and collect yourself."