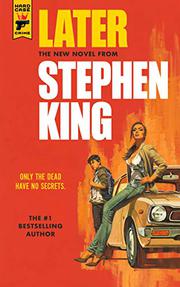 Horrormeister King follows a boy’s journey from childhood to adolescence among the dead—and their even creepier living counterparts.

Jamie Conklin sees dead people. Not for very long—they fade away after a week or so—but during that time he can talk to them, ask them questions, and compel them to answer truthfully. His uncanny gift at first seems utterly unrelated to his mother Tia’s work as a literary agent, but the links become disturbingly clear when her star client, Regis Thomas, dies shortly after starting work on the newest entry in his bestselling Roanoke Saga, and Tia and her lover, NYPD Detective Liz Dutton, drive Jamie out to Cobblestone Cottage to encourage the late author to dictate an outline of his latest page-turner so that Tia, who’s fallen on hard times, can write it in his name instead of returning his advance and her cut. Now that she’s seen what Jamie can do, Liz takes it on herself to arrange an interview in which Jamie will ask Kenneth Therriault, a serial bomber who’s just killed himself, where he’s stowed his latest explosive device before it can explode posthumously. His post-mortem encounter with Therriault exacts a high price on Jamie, who now finds himself more haunted than ever, though he never gives up on the everyday experiences in which King roots all his nightmares.

Crave chills and thrills but don’t have time for a King epic? This will do the job before bedtime. Not that you’ll sleep.